The port is on the Elba Island, the largest one of the Tuscan Archipelago. It’s the second largest port of the island and the closest point to the Italian mainland, only 10 km from Piombino.

The port is on the Elba Island, the largest one of the Tuscan Archipelago. It’s the second largest port of the island and the closest point to the Italian mainland, only 10 km from Piombino. Napoleon Bonaparte was exiled here for almost 10 months until in 1825 he escaped to go back to France and reclaim power.
The Ancient Greeks named the island Aithalia because of the smoke that was coming from the iron mines. Travel to the “iron” island with cheap ferry tickets to Cavo through Let’s Ferry. 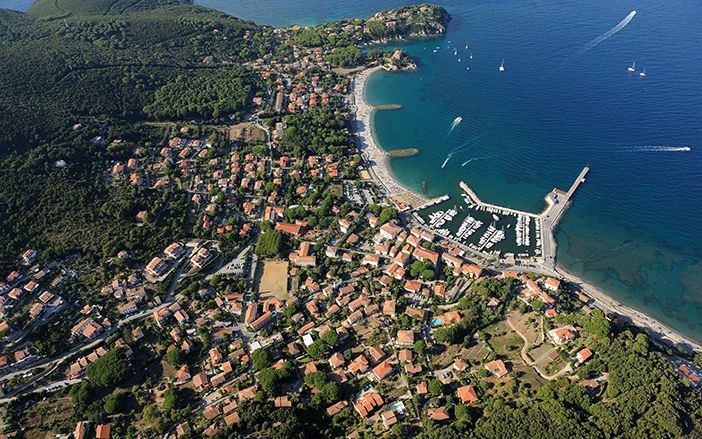 The port of Cavo

Best attractions
• The Statue of the Virgin Mary of the Miracles (Statua della Madonnina dei Miracoli), is at the entrance of the port, protecting sailors.
• The Tonietti Mausoleum is a 30-minute walk from the port. It’s an impressive, though deserted, tower in the woods on the Lentisco Mount with a panoramic sea view. It was built in 1.900 by the Florentine architect Adolfo Coppede by order of the Tonietti family, who were owners of the local mines.
• Organise a Napoleon themed tour. During his exile on Elba, he became the island’s Emperor. Visit Portoferraio, the capital of Elba, to see Villa dei Mulini, Napoleon’s manor and Villa San Martino, his summer resort. You can reach the city by car, bus or ferry as it’s the largest port on the island.

Best beaches
• Spiaggia di Cavo is just 400 metres from the port. It’s public in some parts and private in others. You can rent a canoe and there are some restaurants and cafes.
• In Cala delle Alghe, as its name states, you may see a lot of algae (alghe). Swim in an ideal scenery, a small, secluded cove, both rocky and sandy. It’s 15 km away from the port.
• Very close from there is Spiaggia di Frugoso, a pebbled beach with crystalline waters. From there you have amazing view to the Italian coast and the Isola de Topi. You can rent a sea bike from the beach bar to get to the small island.

Best activities
• Walk or ride a bike along the esplanade at the port.
• Enjoy diving and snorkelling to see colourful corals and hundreds of fish kinds, including the rare starfish.
• Hiking at the Capo Costello. Elba island has many trails with amazing view to the Tuscan Archipelago and it’s a great trekking destination. You can explore them on your own or by joining groups.

Tip: You can reach the port by car, bus, plane or ferry. The Marina di Campo airport is 35 km away from the port.

Don't miss: Only here will you taste the unique specialty cake Schiaccia Briaca that awaits every guest of the island. It is also known as the “drunken” cake as one of the main ingredients is Aleatico, the local red dessert wine. Travel to the third largest island of Italy with cheap ferry tickets to Cavo through Let’s Ferry.

Information about the port of Cavo

The port is connected to Piombino and Portoferraio. The facilities you will find at the port are free Wi-Fi, ATM, taxis, car, boat and scooter rentals, free parking.