Book tickets for all Grimaldi Lines destinations online and compare prices across all routes in just 3 steps! Pay online and receive your tickets anywhere!

Book tickets for all Grimaldi Lines destinations through Let's Ferry.

A few words about Grimaldi Lines

The history of Grimaldi Lines began in Naples after the Second World War and is inextricably linked with the name of Achille Lauro, although the founders of the Group are the brothers Luigi, Mario, Ugo, Aldo and Guido Grimaldi. Around 1850, Gioacchino Lauro from Sorrento founded a joint-stock steamship company, one of the first in Italian shipping. Achille, son of Gioacchino, inherited from his father, two main characteristics: passion for the sea and business sense. In this way, he became the most important European shipowner of the 60s. Amelia Lauro, daughter of Gioacchino and sister of Achille, married Giovanni Grimaldi, a man of culture, but without a naval spirit. It was the female gender that played a fundamental role in the entry of the Grimaldi family into the maritime world, as Amelia was the one who asked her brother to take Guido under his guidance and made her children love the sea. In 1947, the five brothers founded a new shipping company. Along with their years of experience with Achille, they bought the “Orione” (one of the 50 Liberty ships that the US sold to Italy after the war to help it rebuild its fleet) and started their maritime freight business. However, that year also saw the peak of transatlantic passenger travel, something that the Grimaldi Brothers noticed in time and rushed to connect the Mediterranean with South America with modern and comfortable ships.

In the early 1960s, the Liberty ships were retired and replaced by modern bulk carriers, which gave a strong boost to freight transport. However, the landmark year for Grimaldi was 1969, when the Grimaldi Brothers started transporting vehicles between Italy and the UK with Ro/Ro ships. This sector was the driving force behind the development of the Grimaldi Group for the next forty years, while the routes soon expanded to routes between Northern Europe and West Africa as well as South America. In the last 15 years, the Group has followed a policy of expansion, both in maritime connections and in its fleet, while also trying to achieve the goal, set by the European Union, for the transport of goods in an environmentally friendly way. This achievement is possible by acquiring leading companies such as Finnlines and Minoan Lines.

The above ships operate the following itineraries: 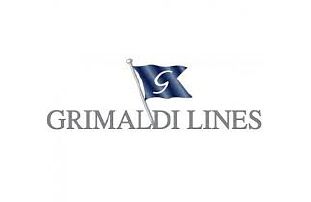