We’ve rounded up some of the most exciting Natura - protected Greek island destinations to inspire you!

Greece’s climate is ideal to host many rare flora and fauna species. It is no surprise that several of the country’s mountains, lagoons, and beaches have been included in the European Union (EU) conservation project Natura 2000 for the protection of rare and threatened species and natural habitat that contributes to the sustainability of the EU biodiversity. We’ve rounded up some of the most exciting Natura - protected Greek island destinations to inspire you! Whichever one you pick for your next vacations, you’ll get the chance to see some of the most rare and uniquely beautiful species of animals, birds and plants.

Astypalea
The eastern side of the island with its beautiful main town (Chora), picturesque windmills, the Castle, as well as the emerald-green waters of Koutsomytis are all part of the Natura 2000 program. 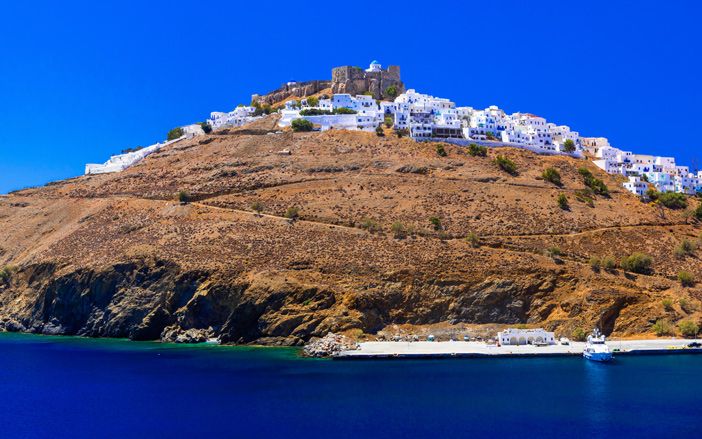 The beautiful Chora of Astypalea

Further, the complex of Astypalea’s 12 adjacent islets that include Kounoupoi, Avgo and Pontikoussa are also protected areas. At the bottom of the sea, there is a large area of sea grass (Posidonia Oceanica), while the islands’ caves offer shelter to the Mediterranean monk seal (monachus monachus), the striped dolphin, the green sea turtle (chelonia mydas) and other mammals. The island’s forests are also home to three different species of lizards and mammals such as the black rat (rattus rattus) and the lesser white-toothed shrew (crocidura suaveolens). 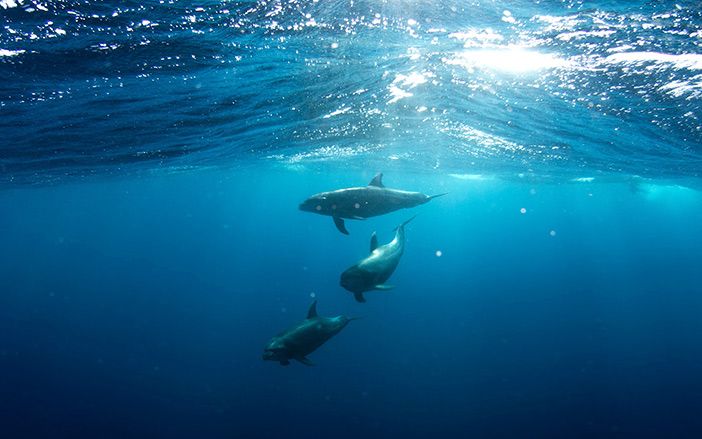 Dolphins in the Aegean Sea

Zakyntos (Zante)
Featuring one of the most beautiful beaches in Greece – the famous Navagio Beach (Shipwreck Beach) - the flower of the Levant is largely known for its dazzling deep blue sea water colors. 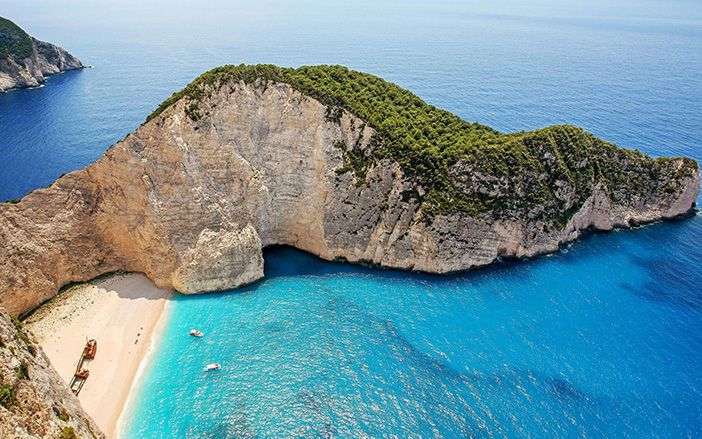 It is in these waters where the loggerhead sea turtle (caretta–caretta) breads. The village of Laganas, the ultimate party destination for both foreign and Greek tourists, is of significant ecological importance: The Bay of Laganas, as well as the Strofades islets, Marathonisi and Pelouzo are all protected areas for their six beaches where turtles migrate to lay their eggs every summer. Take advantage of Let’s Ferry’s hassle-free booking system to visit Zakynthos. 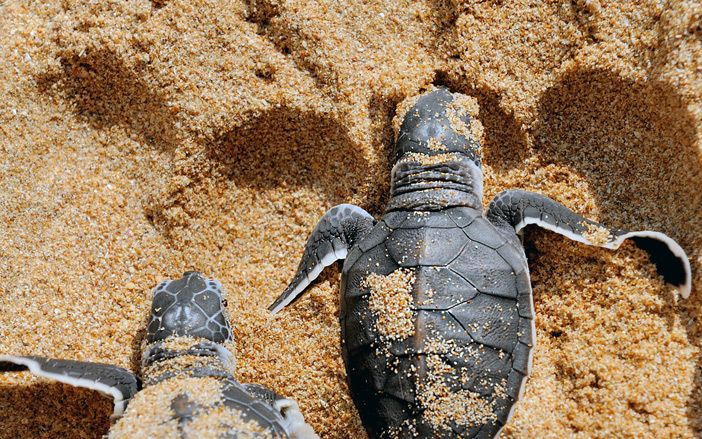 The small Caretta caretta in Zakynthos

Ikaria
You’ve probably already heard all about Ikaria’s beautiful Seychelles beach, and that people on this island tend to live longer than just about anywhere else in the world. But, what you probably may not know is that Ikaria also exhibits a unique biodiversity and several of its areas have been included in Natura 2000. Plan your trip to the island and make sure to include some of nature’s most impressive and unspoiled sights: the extraordinary Randi Forest, the oldest in the Balkan Region, home to Turkish worm lizards, badgers, hedgehogs, and martens; 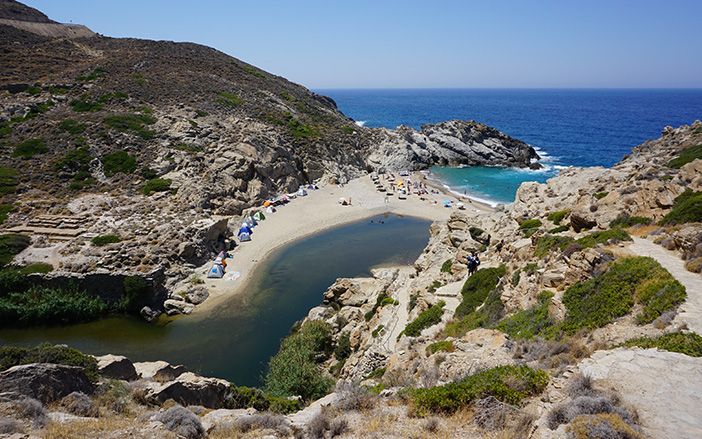 Plants and river near the beach

The Fanari beach settlement, an important marine habitat for the Monachus-monachus seal and the Caretta-caretta turtle; the Homeric Mount Atheras, home to rare plants, a wide variety of birds, reptiles and amphibians, as well as the Mediterranean monk seal and the lizard of Ikaria that are frequently seen in the mountain caves. Agios Nikolaos is also listed in the Natura 2000 project because it hosts birds of prey and migratory birds such as the Long-legged buzzard (Buteo rufinus).

Corfu - Paxos - Antipaxos
Located on the island of the Faiakes, the Antinioti Lagoon and the Lake Korission (Korissia Lagoon) are two important bird areas protected under the program. Natura 2000 also extends to the wider sea area around Corfu that includes the islands of Paxos and Antipaxos. 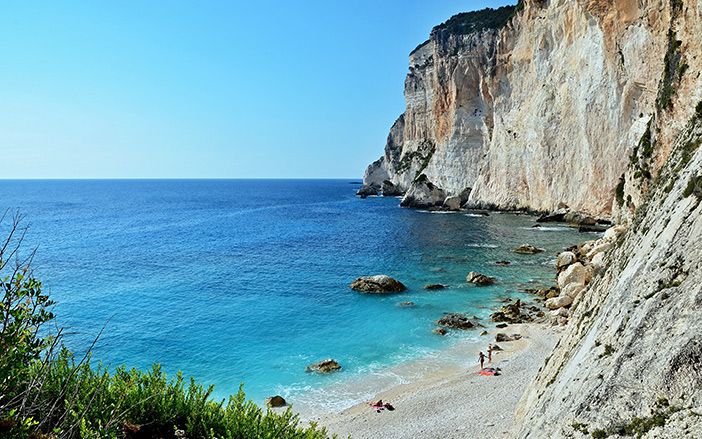 The beach Erimitis in Paxoi island

It is on these coasts that one can see green lizards (Lacerta viridis) sunning on rocks, Risso's dolphin (Grampus griseus), and the Mediterranean monk seal (monachus monachus). Diving into the turquoise waters of the Butumi beach in Antipaxos, there is a good chance you’ll spot some fin whales or find purple sea urchins (Paracentrotus lividus). Plus there’s over 400 types of different plants on the islands. Indulge in all that nature has to offer! 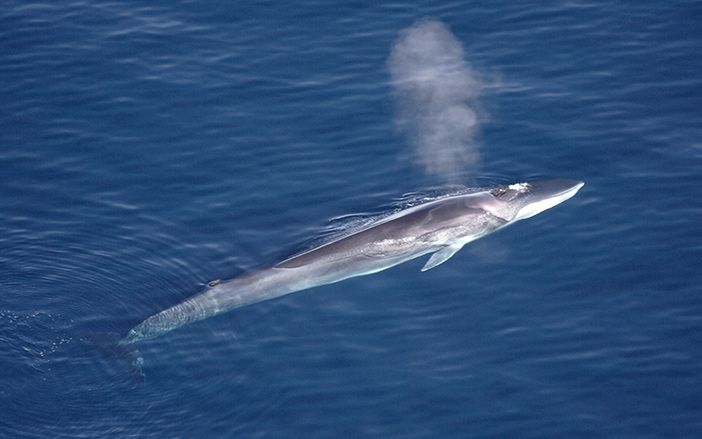 Kythira - Antikythera
During ancient times the area around these two adjacent islands was a crossroads of merchants and sailors. Today, it is also a passage for many migratory birds. The European robin redbreast, the lesser grey shrike, the Ruppell’s warbler, and the typical small evergreen yellow flower called “Sempreviva”, are just some of the many species that love the hospitable climate of Kythira and Antikythera. 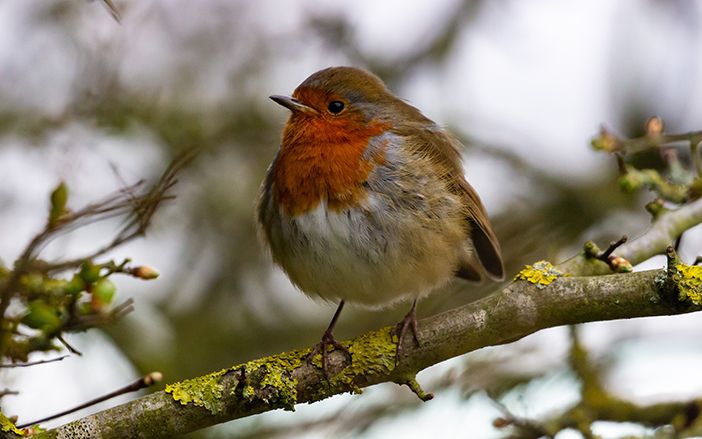 The northern part of the island and the seven nearby rocky islets, some of them being Prasonisi, Koufo and Fidonisi are included in Natura 2000. Option for hiking and canyoning in Kythira! Enjoy its unique landscapes and experience the best of what nature has to offer!

Limnos
The low-key island of Limnos offers plenty to the visitor: traditional architecture, deer running up and around the castle of Myrina, and other unexpected surprises like the “Ammothines”, that is sand dunes that form a unique landscape resembling a small desert. The three island lakes of Alyki, Chortarolimni and Asprolimni, are also listed under the EU Natura 2000. 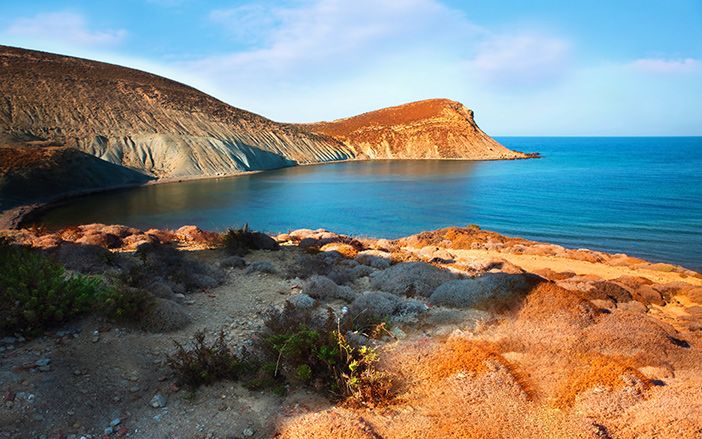 Mytilene (Lesvos)
Lesvos is a uniquely beautiful destination. The Petrified Forest in Sigri, the imposing Castle of Mytilene, the city’s mansions and small towers, the village of Molyvos, and the deeper-than-blue waters are some of the reasons why Lesvos attracts tourists from all over the world every year. 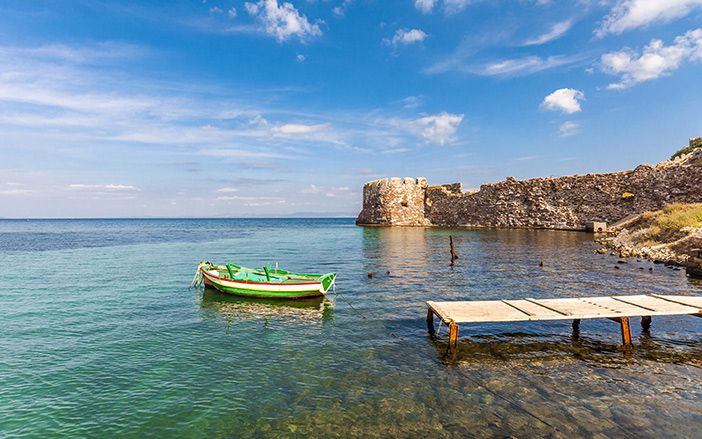 Castle near the sea in Lesvos island

There are three areas on the island that are listed under the EU Natura 2000: The Western Peninsula, where rare species of birds such as the cinereous bunting and the Kruper's nuthatch live, the Gulf of Kalloni, where pink flamingos and white storks often make an appearance on its shallow waters and, Agios Efstratios, the small island of Lesvos and its coastal zone. This is the only place in Greece where the medicinal herb Melilotus Elegans, and the rare species of valonia oak (Quercus Macrolepis) as well as willows, wicker and oleanders can be found. 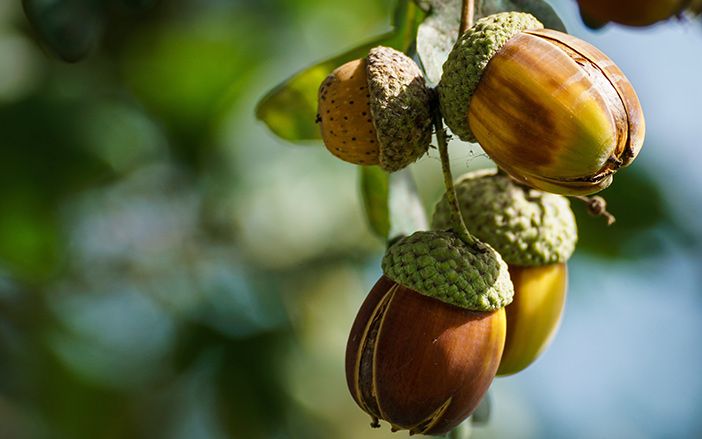 The rare species of valonia oak in Lesvos island

In the underwater area, seagrass beds of Posidonia Oceanica, an aquatic plant that supports the reproduction of many marine organisms can be found, while mammals such as the common bottlenose dolphin and the sperm whale frequently cross the sea around the island.

Sporades
CosmopolitanSkiathos, the largest of the Sporades islands, stands out for its medieval castle, its alluring beaches, such as Banana, Lalaria, Fonissa, and the adjacent islands’ tropical landscape, comprising sand dunes and crystal-clear waters. The famous Koukounaries is not just another beautiful Greek sandy beach. 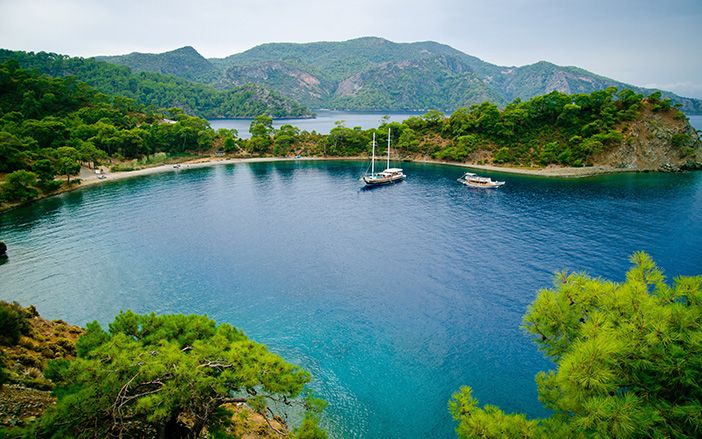 Behind the beach lies one out of a total of three pine tree forests in all of Greece. Located close by, is Lake Strofilia, where cormorants and swans live. 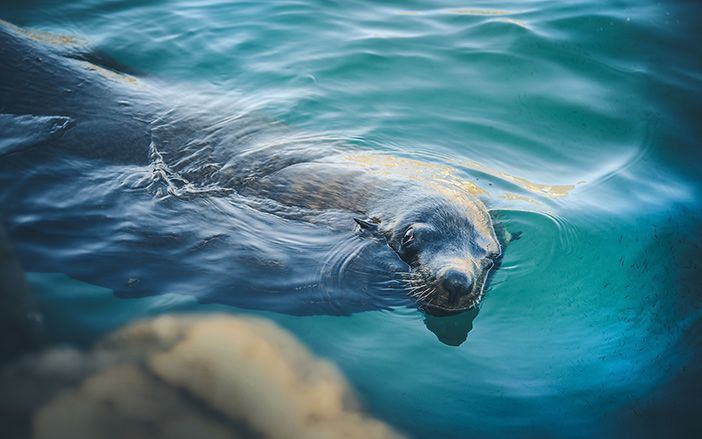 In 1992, the Alonissos - Northern Sporades National Marine Park was established. It is a nature reserve for a series of terrestrial and marine species living in the Mediterranean Sea, including the Mediterranean monk seal. 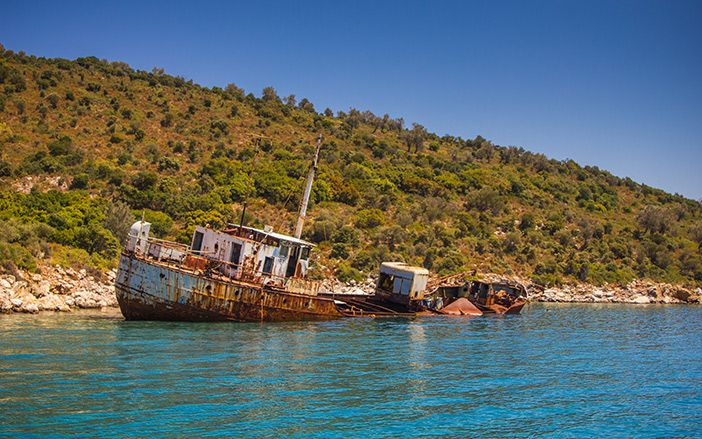 If you are into hiking, Alonissos’ cobbled paths and rich fauna and flora is the ideal destination for you!
Check out all available itineraries at letsferry.com and book your cheap ferry tickets to all the islands whose nature is protected under the Natura 2000 project.