Not many countries combine a history of thousands of years with a magnificent scenery.

Greek tourism isn’t just about crystal clear beaches and delicious local flavors. Not many countries combine a history of thousands of years with a magnificent scenery. If you want to learn more about the places where Philosophy, Architecture and Medicine thrived, discover the great archaeological treasures of the Greek islands with Let’s Ferry!

Delos - A great cultural heritage in a tiny island 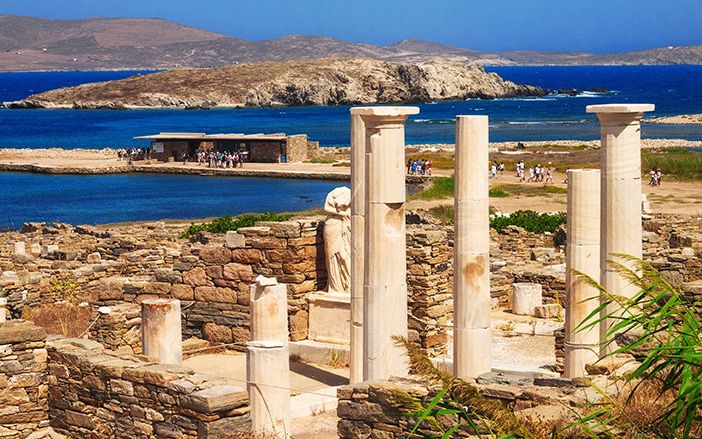 The ancient site in Delos island

Just a few miles from vibrant Mykonos there is Delos, a quiet, small island with an ancient town that still amazes archaeologists. In the local Museum you can find a vast collection of 30.000 vessels, 8.000 sculptures and 3.000 inscriptions. 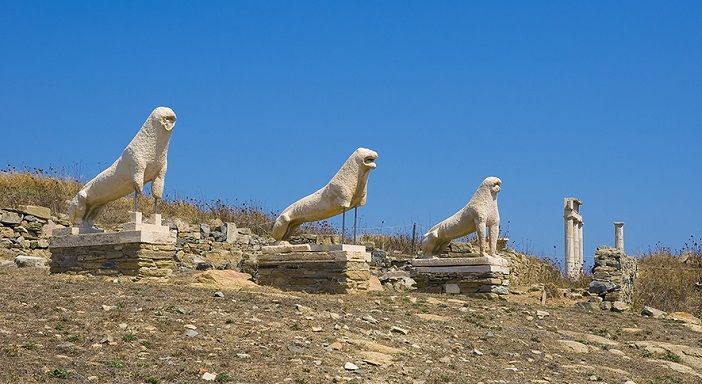 The ancient statues in Dilos island

The island is protected by the Greek Ministry of Culture and no one is allowed to spend the night there. Visiting is only allowed when the Museum is open. Book ferry tickets to hop on and off to the close islands of Syros-Tinos and once you reach Mykonos, plan an unforgettable day trip to Delos.

Naxos - Where Gods rest by the water 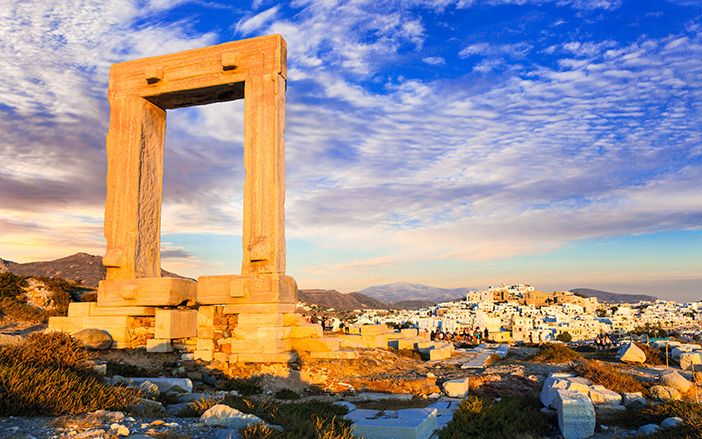 Portara will be the first thing you will see when entering the port of the largest island of the Cyclades. This prominent site is a massive marble gate and it is what has remained still from the temple of Apollon, the God of Light and Sun who gifted the island with a beautiful sunlight. The walk from Chora, the main town, towards the ancient temple offers a deeply romantic sunset view. Make your booking fast and easy, get your ferry tickets to Naxos by Let’s Ferry to discover the island which in the 6th century B.C. was the epicenter of culture, trade and sailing. 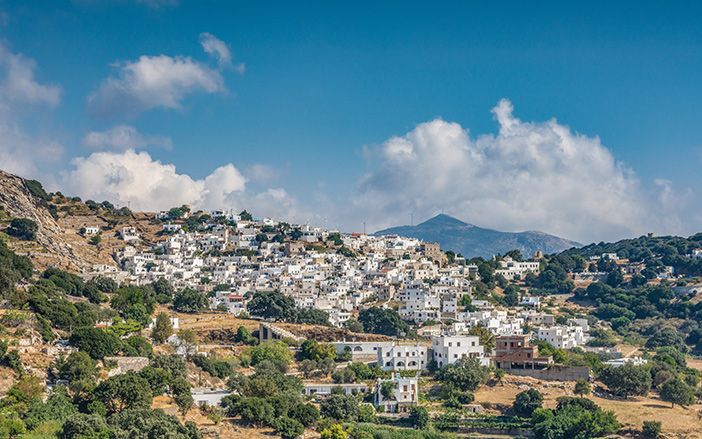 The small village in Naxos island

In Sagri, one of the most picturesque villages of Naxos, you will have the chance to see the 6th century BC temple of Demeter and the tower of Bazeos. The most significant discovery of Naxos is on the north-east side of the island, at the coastal village of Apollonas. Kouros of Apollo, the unfinished (almost 11 meters long!) statue, lies on the ground. Allegedly, it depicts god Apollo or god Dionysus. The Archaeological Museum of Naxos is in the center of the island, in Apiranthos, which houses findings from the first Cycladic Era. Here, you can also see the Byzantine Church of Haghia Kyriaki awarded with the 2018 European Union Prize for Cultural Heritage. 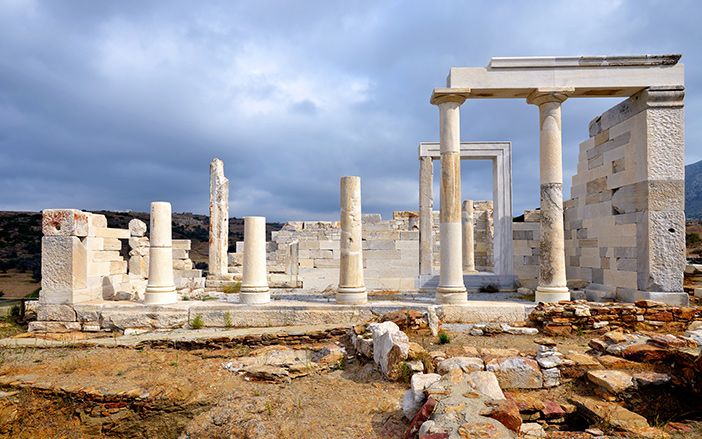 The temple of Dimitra in Naxos island

Apiranthos was first inhabited by Cretans due to their trading affairs with the people of Naxos back in the 13th century. That’s why you will hear people speaking the Cretan dialect or playing lyra, a traditional Cretan instrument. All that while tasting the local delicacies that include the country’s most famous potato. What more can you ask for?

Santorini - The Pompeii of the Aegean 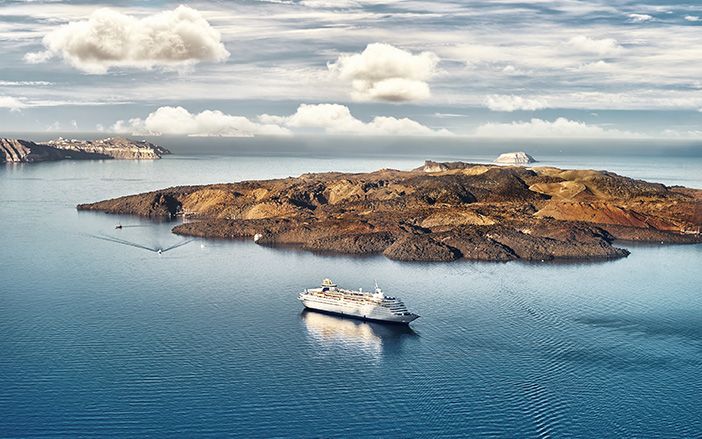 The volcano view in Santorini island

The top destination in Greece has more to offer than the volcano catamaran trips and world-renowned sunsets in Oia. In the southern part of the island, Akrotiri is the largest prehistoric settlement of the Late Neolithic Period (4th millennium BC). After the volcano erupted, the settlement was covered by volcanic ash, that left it in a good condition. Book a guided tour to explore more about this impressive ancient city and the prehistorical excavated findings. Or enjoy a 3D video tour protected by the hot sun in a modern indoor construction. Book your ferry tickets to Santorini at Let’s Ferry to live this unique experience. Don’t forget to visit the Prehistorical Museum of Thira, located in Fira, which is considered to be the extension of Akrotiri.

Rhodes - Where the knights are still whispering 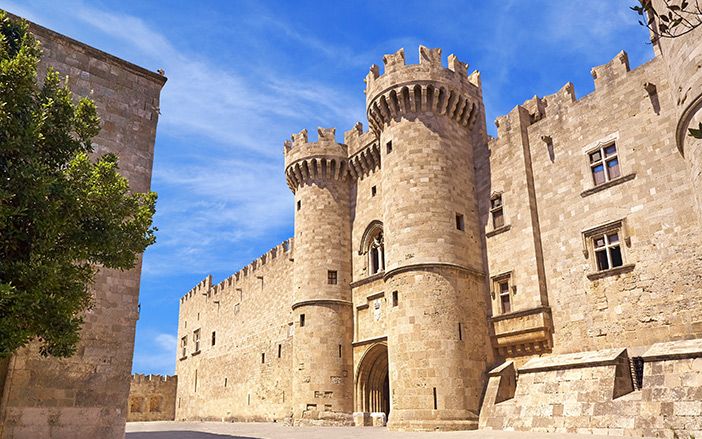 The capital of the Dodecanese islands, is one of the most popular destinations in Greece and a birthplace of rich history which dates more than 2.400 years ago. The Old Town is one of the best-preserved medieval towns in Europe and an UNESCO World Heritage designated city since 1988. A visit to the magnificent Palace of the Grand Master of the Knights it’s like time has stopped and you can still hear the echo from the knights’ tales. Ancient Lindos, Kamiros and Vroulias are great historical landmarks. Don’t miss the exceptional castle of Monolithos and the remains of the Temple of Apollo inside the impressive Acropolis of Rhodes. 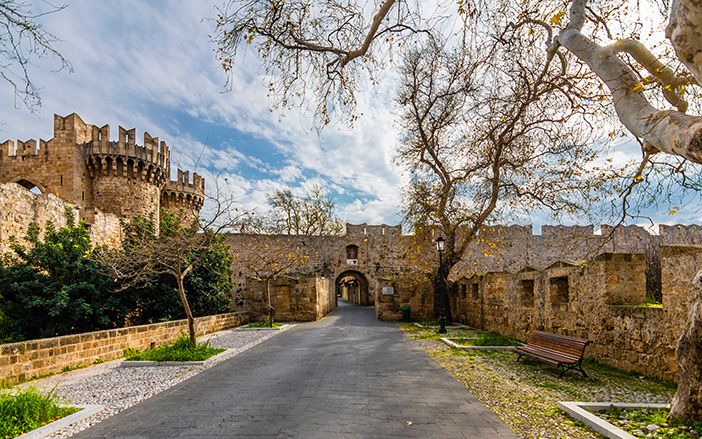 Book cheap ferry tickets to Rhodes through Let’s Ferry, pack your most comfortable shoes and stroll around the medieval cobble streets that will take you to another era!

Crete - Home to the Minoan civilization 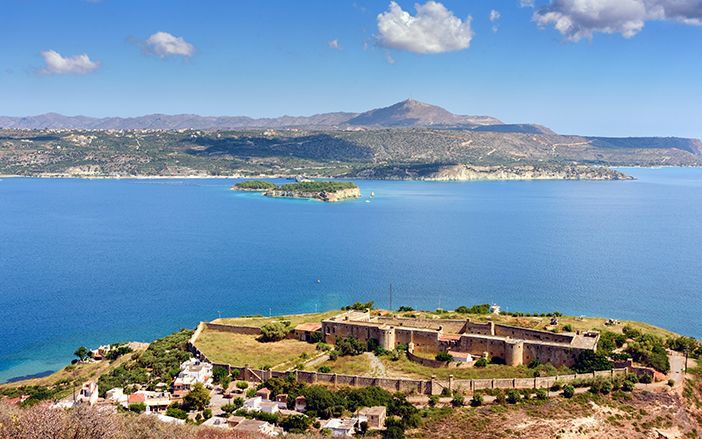 The archaeological site in Aptera Crete

When you say “Crete”, are the exotic beaches and the traditional festivals with lyre and raki the only things that come in mind? Well, then you’ve known only half of the island’s beauties. 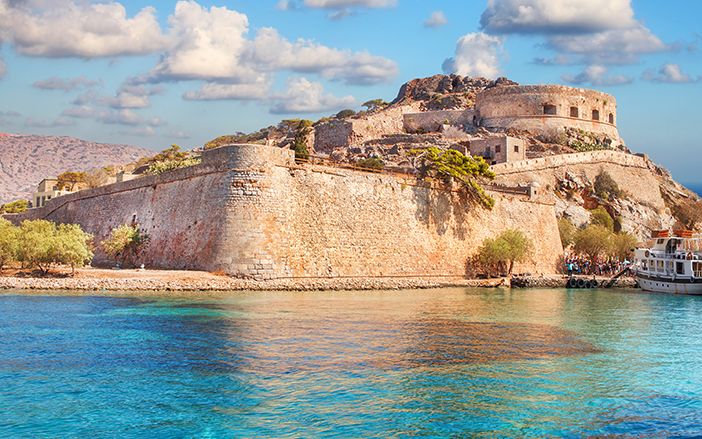 154 different archaeological sites are just a click away and you can see them all with a ferry ticket to Heraklion, Rethymnon, Sitia and Chania through letsferry.com. The famous Knossos, the ancient Koules Fortress, Aptera in Chania and the Fortress of Spinalonga will captivate you! 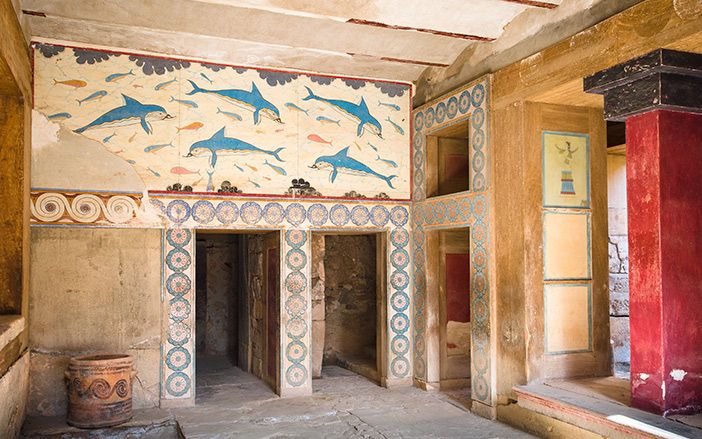 The Minoan Palace of Knossos

People from all over the world travel to Heraklion to see Knossos, Europe’s oldest city and landmark of the Minoan Civilization. Moving southern, the Minoan Palace of Phaistos hosts important findings from 6.000 B.C., according to archaeologists. You should also schedule a visit to the Archaeological Museum of Heraklion, one of the best not only in Greece but also in Europe. Lychnostatis, also known as the Folk and Tradition Museum, is in Hersonissos. 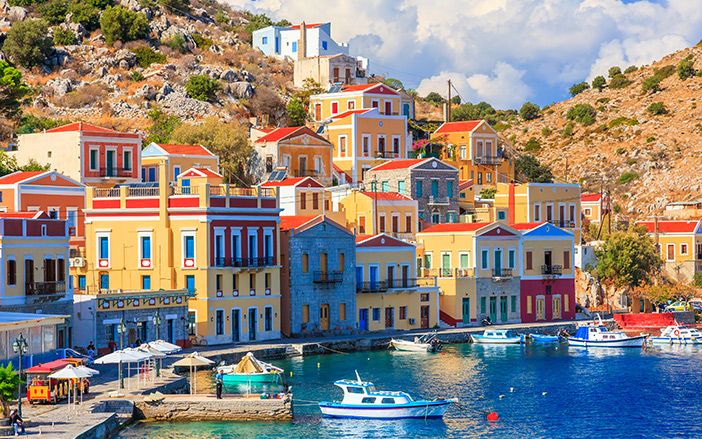 Symi with the colourful houses in the port

In 2011, the whole island of Symi was declared by the country’s Central Archaeological Council as an archaeological site. With 159 different historical monuments and preserved settlements scattered around only 5.800 hectares, we can certainly see why. Blessed by Three Charites, the goddesses of fertility and beauty, this island has a lot to offer. Take a journey to history in the Archaeological and Folklore Museum of Symi and see the ruins of ancient temples in Panormitis and Pedi. This rare gem of Greece is easy to visit with ferry tickets to Symi through Let’s Ferry.

Kos-Where the father of Medicine was born 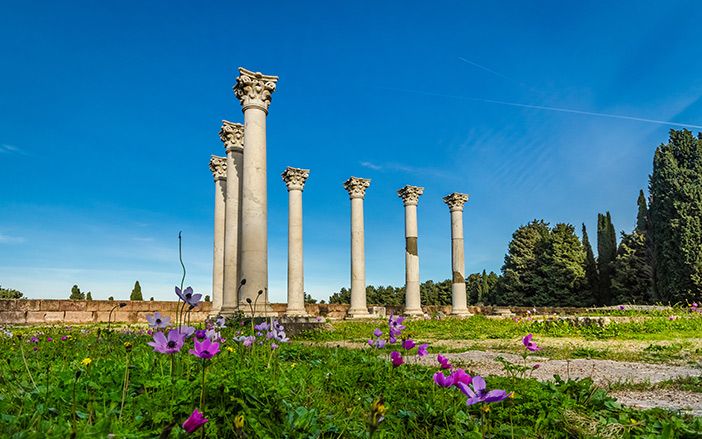 Asclepeion, the largest healing temple of Ancient Greece dedicated to Asclepius the first doctor-demigod in Greek Mythology, is located very close to the town of Kos. Surrounded by a pine forest which in the 4th century B.C. was considered sacred and dedicated to god Apollon, it served as a medical, educational and sanctuary center for almost eight centuries. Hippocrates taught his students in Asclepeion and there are some restored columns from the school. Kos will treat your curiosity for new adventures and heal your travel-thirsty nature, just book a ferry ticket there at letsferry.com and see. Start by Ancient Agora, the Roman Odeon and Casa Romana which is a building similar to those found in Pompeii. 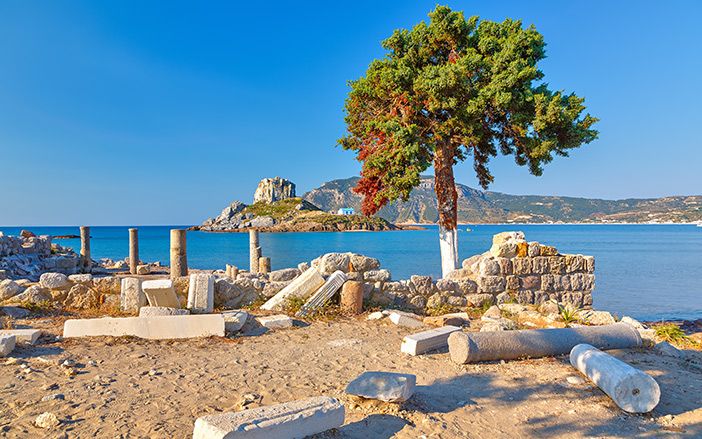 Some restored columns from Kos island

Don’t wait for summer. Choose an off-peak season to travel through history in a magnificent island and at the same time avoid the long queues and overcrowded sites of August. If all of the above are not reasons enough to start searching for the best offers in ferry tickets through Let’s Ferry right now, we don’t know what is. Happy time travels!