The most beautiful ports in Italy

Italy, the birthplace of pasta and gelato, is also home to many beautiful port towns!

Italy, the birthplace of pasta and gelato, is also home to many beautiful port towns! Centuries’ old history, ancient fortresses, romantic gondola rides, unique museums, and plenty of local charm leave its visitors awestruck and wanting to come back. It is simply not possible to find yourself in one of the beautiful Italian ports cities we list below without wanting to spend more time there. On your next Italian adventure with Let’s Ferry, take the time to visit the many cultural attractions, restaurants, and award-winning beaches, that are just a few of the many reasons to explore these beautiful port towns.

Ancona
Ancona, one of the main ports of the Adriatic Sea for passenger traffic, was built by Greek settlers from Syracuse going back as far as 394 BC. It boasts beautiful monuments representative of Roman architecture, such as the triumphal Arch of Trajan, the Arch of Clementine (Arco Clementino) and the impressive pentagonal 18th century building of Lazzaretto. Perched on the hill of the port town of Ancona, the imposing Saint Cyriacus of Ancona Cathedral (Basilica Cattedrale Metropolitana di San Ciriaco) offers a beautiful view to the Adriatic Sea. 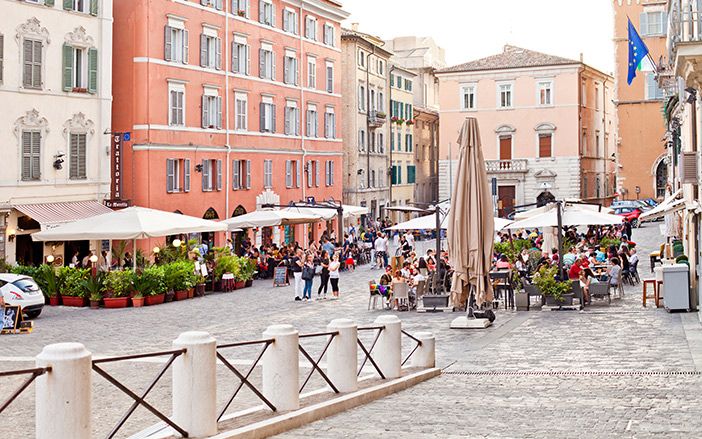 In Ancona, you can also visit the Tactile Museum (Museo Omero), the only museum for the visually impaired in Europe, where art is experienced not only through sight but also through touch. In the 35-acre park of Cardeto (Parco del Cardeto), you can enjoy a leisurely walk and also visit monuments such as the Jewish Cemetery. Driving 20 km out of Ancona, you can swim in one of the best beaches of Italy, the Two Sisters Beach (Spiaggia delle Due Sorelle). And remember, there’s a legend that if you drink water from the Fontana del Calamo, you will return to the city in the future. You can do that anytime with cheap ferry tickets from Let’s Ferry from and to the ports of Corfu, Igoumenitsa, Patras and Trieste.

Venice
Venice is one of the most romantic port cities in the world. And it is not hard to see why: its Renaissance-inspired architecture, gondola rides, and beautiful sunsets are guaranteed to spark romance in your heart. Its extraordinary beauty and architectural masterpieces have rightly earned Venice and its Lagoon the designation of a World Heritage Site. Absolute must-see sights include the Basilica of St. Mark (Basilica di San Marco) and its 98-meter tall Bell Tower, the Doge's Palace (Palazzo Ducale), and the Golden House (Ca’ d’Oro). 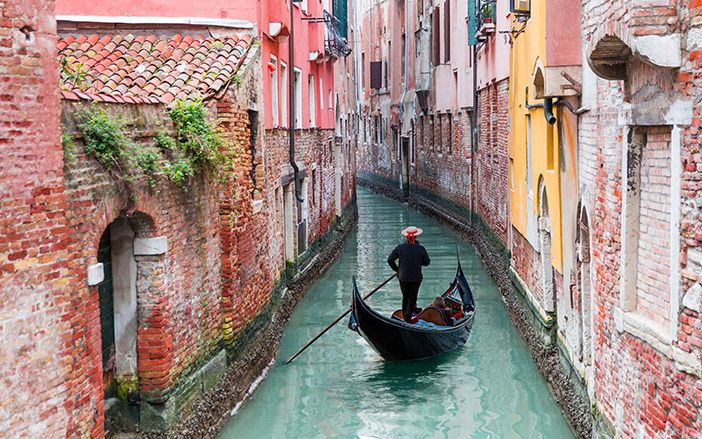 Gondola ride through the Grand Canal

A gondola ride is a Venice-unique way to visit some of the city’s hidden gems and famous sights. Your gondola ride through the Grand Canal and the Bridge of Sighs (Ponte dei Sospiri), may get a little shaky due to the traffic but it is definitely an experience not to be missed. During the world-famous Carnival of Venice, unforgettable impressions, imaginative masks and plenty of fun and alcohol is sure to make this a trip to remember. From the port city of Venice, Let’s Ferry takes you to Igoumenitsa, Patras and Corfu.

Livorno
The busy port of Livorno is the third largest port in Western Italy. A walk along the seafront of this great little port town will lead you to the Terrace of Mascagni (Terrazza Mascagni), a large checkerboard floor terrace overlooking the sea. It is the perfect place to enjoy a leisurely stroll and watch the sun set over the Mediterranean Sea as the boats slowly make their way into the port. 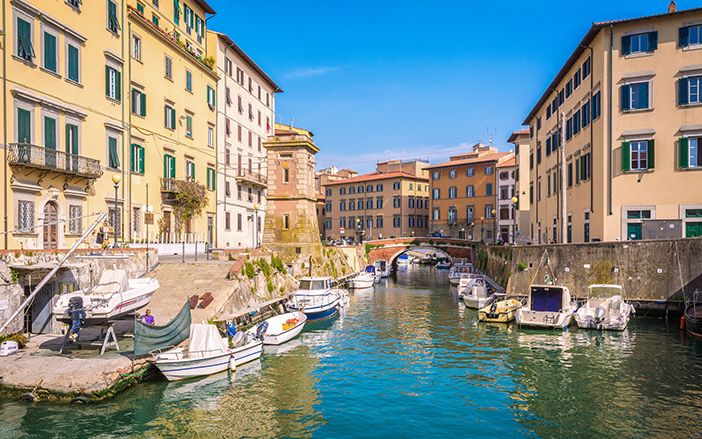 Also located on the boardwalk is the Livorno Aquarium, a modern center of marine life, where kids and adults alike can learn more about different species of fish and life under the sea. While in Livorno, don’t forget to visit the New Venice. One of the best areas to check out, this district features small canals and picturesque 17th century style bridges that resemble the Venetian atmosphere – hence the fitting name of New Venice. Departing from the port of Livorno, Let’s Ferry takes you to Capraia, Bastia, Olbia and Palermo.

Bari
The principal landmark of Bari is the seaside Castle of Bari (Castello Svevo) that is primarily used today for hosting cultural events. The Basilica of Saint Nicholas (Basilica di San Nicola), is one of the most impressive cathedrals in the region of Puglia, that Bari is part of. The Teatro Petruzzelli is one of the most famous operas in Italy. 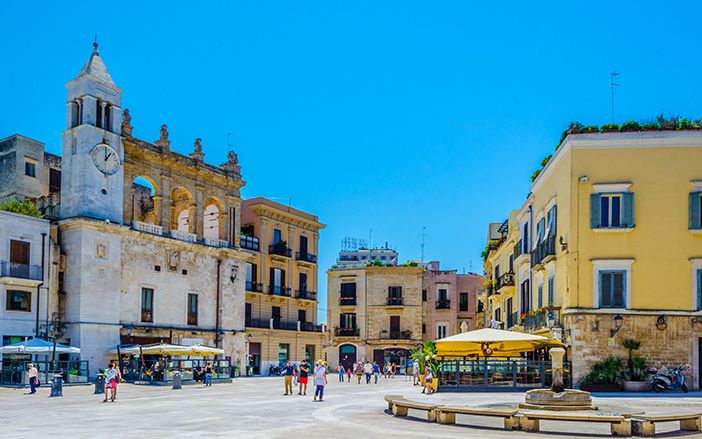 Square in the center of Bari

Every event hosted there is considered by default to be of great musical importance. Let’s Ferry takes you from this beautiful port of Southern Italy to Durres, Igoumenitsa, Corfu, Kefalonia and Patras.

Brindisi
Located on the coast of the Adriatic Sea in the southeast of Italy, this beautiful port town is also a major port of trade and travel that connects Italy with Greece and the Middle East. The best way to explore the Old Town of Brindisi is on foot. Visit the beautiful St. John the Baptist Church (Basilica di S. Giovanni Battista), the baroque Seminary Palace, the Roman Columns at the end of the Appian Way, and the Cathedral Square (Piazza del Duomo). 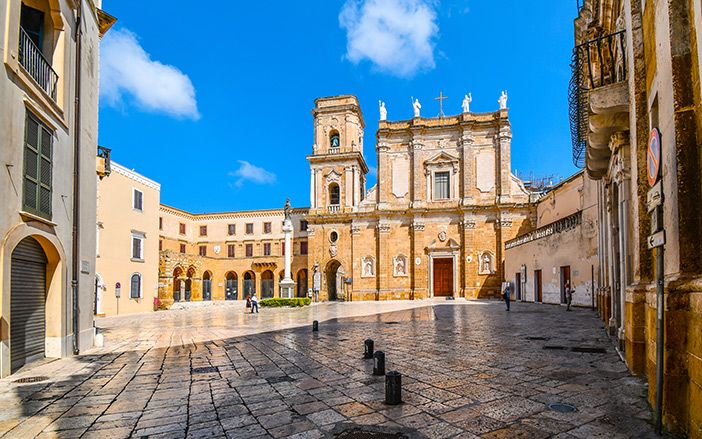 Brindisi is a relatively small and easy town to get around, with people usually meeting along the seafront where the Dolphin Statue is. Around that area, there are plenty of restaurants and great wine bars featuring locally produced wines, such as the Negroamaro, a dark-skinned grape variety grown in Puglia, the region of Italy, where Brindisi is part of. Let’s Ferry connects Brindisi to the Ionian Sea side of Greece.

Ravenna
Technically, not a port city since it connects to the Adriatic Sea by the Candiano Canal, Ravenna is a short one-hour drive from the independent state of San Marino. Its cultural monuments and art reflect Ravenna’s importance as a major port of entry for the Byzantine Empire. The Basilica of Sant' Apollinare in Classe is an important Byzantine monument, which along with the Orthodox Baptistery and other early Christian monuments are inscribed on the UNESCO World Heritage List. 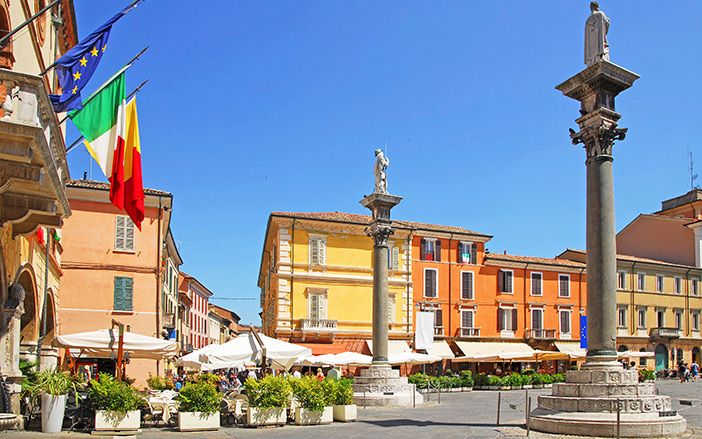 An expansive amusement park in Ravenna, Mirabilandia, is just 20 minutes from the port, if you’re up for a few hours of fun with family and friends.

Salerno
Very close to Naples, on the outskirts of Campania, is the port town of Salerno. While beautiful itself, it is often overshadowed by the most popular destinations of the Amalfi Coast, and its seaside postcard-like towns, like Praiano and Positano. 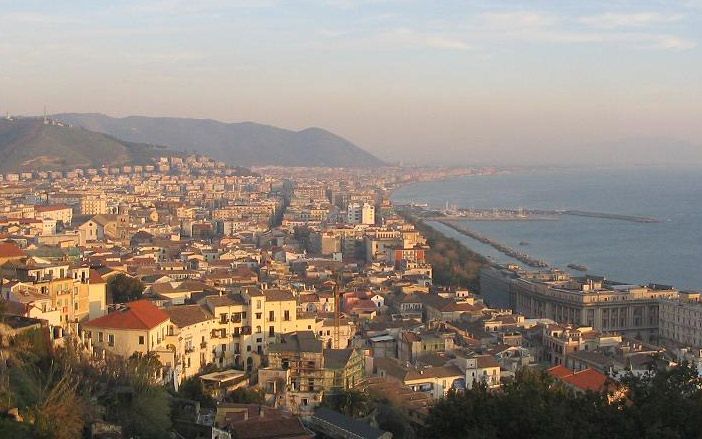 Colorful hilltop houses with a view of the clear blue shimmering waters of the Tyrrhenian Sea are connected by narrow and winding roads. It will only take you half an hour by train to get to the coast of Amalfi. And, from the port of Salerno you can also get to Sicily and Tunis with cheap ferry tickets via letsferry.com.

Trieste
Located close to the northeast border of Italy, the port city of Trieste is just one and a half hours away from Slovenia’s medieval capital city of Ljubljana and two hours from Venice. You will be enchanted by the Miramare Castle (Castello Miramare), its magnificent views, flower and tree gardens. The main town square of the city, Piazza Unita d'Italia, is beautiful in the evening when the buildings lit up and its surrounding cafes and restaurants are bustling with people. 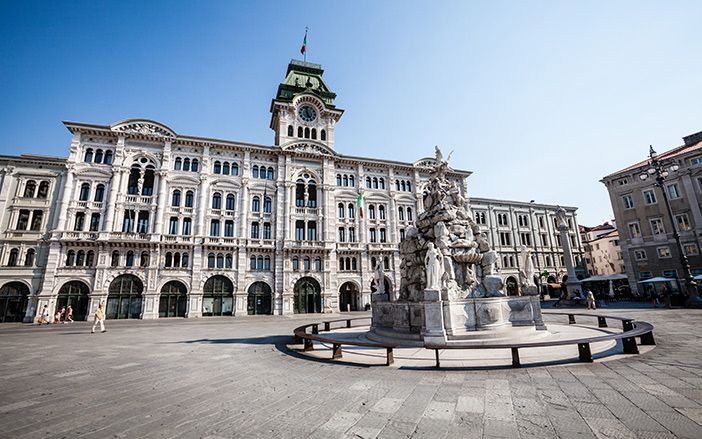 Since it is located next to the sea, taking a walk alongside the seafront at night is an absolute must. The Civic Sea Museum (Museo del Mare) offers an interesting collection of old ship models that have contributed to the history of the city and navigation. The giant cave La Grotta Gigante is the perfect ending to your Trieste city tour. From Trieste, you can easily depart for Patras, Igoumenitsa and Ancona with early booking offers from Let’s Ferry!