Book tickets for all Hellenic Seaways destinations online and compare prices across all routes in just 3 steps! Pay online and receive your tickets anywhere!

Book tickets for all Hellenic Seaways destinations through Let's Ferry.

A few words about Hellenic Seaways

Hellenic Seaways is a subsidiary company of the ATTICA HOLDINGS S.A. (Attica Group). Attica Group is the largest Greek Passenger Shipping Group, while it holds a leading position in the maritime transport of passengers and vehicles in the Eastern Mediterranean. The history of Hellenic Seaways began in 1998, when Pantelis Sfinias founded Minoan Flying Dolphins, as a subsidiary company of Minoan Lines. The first acquisition of Minoan Flying Dolphins was the Ceres Flying Dolphin, while quickly MFD managed to control a very large share of the Greek market, since within 30 days, it bought from its competitors, 30 passenger ships, which were routed to Cyclades, Argosaronicos and Sporades. In addition to the conventional ships, the Highspeed 2, 3 and 4 catamarans, which were built in Australia, were added to her fleet. In 2001, the company was renamed Hellas Flying Dolphins and in 2005 Hellenic Seaways, with Minoan owning more than 30%. In May 2018, Attica Group announced the completion of the acquisition process of the majority stake in Hellenic Seaways - HSW and in January 2021, the agreement to build three (3) state-of-the-art Aero Catamaran vessels for the Argosaronic lines. The catamarans were delivered in the summer of 2022.

Hellenic Seaways offers its customers the “Seasmiles” Loyalty Program, giving them the opportunity to enjoy a series of exclusive privileges and offers, designed to make traveling with its ships an unforgettable experience. Seasmiles members can earn points, book free tickets and enjoy special discounts all year round as long as they are 18 years old (at least) and have taken a trip with Hellenic Seaways in the last 12 months.

The company also offers the possibility of Web Check-In, which is available from 48 hours up to 2 hours before the scheduled departure time.

At the same time, Hellenic Seaways makes attractive offers very often. That is why we recommend you to subscribe to the Let's Ferry Newsletter, so that you will be the first to hear the good news! 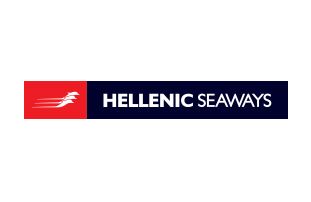